Electrochemistry Unit 5 Class 12 Physical Chemistry, including complete notes, exercises, questions, and solutions, as well as a PDF download For NEB.

Electrochemistry is the branch of chemistry that deals with the relationship between electrical energy and chemical energy and the interconversion of one form into another.

When a metal rod (M) is dipped into a solution containing its own ions (Mn+)then the following three possibilities can occur.

1. No Charge is developed:

Metal ions may collide with a metal rod and deflect back without any change. 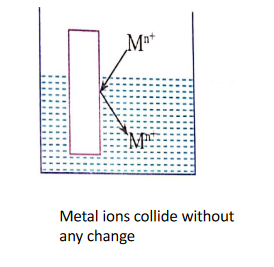 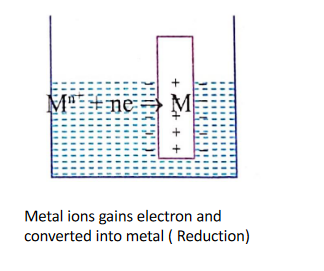 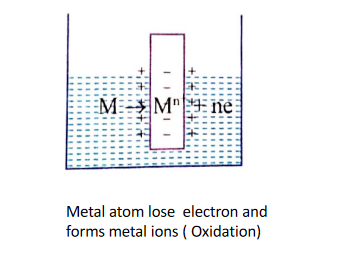 What actually happens depends upon the relative tendency of a metal or its ions.

If the metal has a relatively greater tendency to get an oxidized reaction Eqn. (ii)(3) will occur, and the electrons will accumulate on the metal rod, which will therefore develop a negative charge with respect to the solution. This in turn may attract some metal ions from the solution which may change into metal atoms. After some time, equilibrium will establish as: 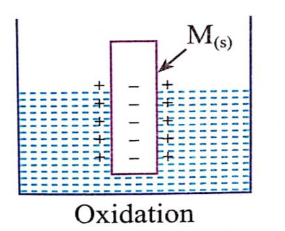 Similarly, if metal ions have a greater tendency to get reduced, reaction Eqn. (i)(2) will occur. Metal ions will gain electrons from a metal rod. As a result metal rod will develop a positive charge with respect to the solution and ultimately the equilibrium will establish as: 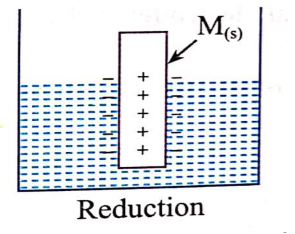 Thus, in either case, there is the separation of opposite charges between the metal rod and its ions in solution which leads to the development of an electrical double layer on the metal electrode and electrolyte solution interface.

Thus, the electrode potential is defined as the potential difference set up between a metal rod and its ions in solution due to the separation of charges between them.

Simply, it is the tendency of the electrode to lose or gain electrons when it is in contact with the solution of its ion.

It is of two types:

The Electrode whose Electrode potential is known as Zero(0)  is called Reference Electrode.

The reference electrodes are classified into two types:

It consists of Platinum and HCl Solutions. Inert Nature of Pt (platinum) is used.
(Platinum is chemically inert and will not oxidize in air at any temperature)

KCl, Hg, and Hg2Cl2 ( calomel) are used in this Electrode and They can behave like Oxidation and Reduction which depend upon the saturated solution of KCl (Cl-).

The mercury is then covered with a layer of mercury and mercurous chloride (calomel) paste. The glass tube is then filled with a KCl solution of definite concentration as shown in fig.

( some calculations and concepts)

Electrochemical series is an Arrangement of metallic elements or ions in the increasing oxidizing potential or Standard Reduction Potential.

The Applications are given as:

An electrolytic cell is a chemical cell that undergoes redox reactions when an electric current is passed through it.

It is mainly used to break down compounds and this process is called hydrolysis.
They are the basis of batteries.

Electrolytic cells are used for all kinds of things:

A galvanic cell (Voltaice cell) is an electrochemical cell that derives electrical energy from spontaneous redox reactions that occur in half cells connected by salt bridges or in single cells separated by a porous medium.

Galvanic cells ( voltaic cells)  are used for all kinds of things:

(i) At the zinc electrode, the metal undergoes oxidation and gives 2 electrons ( de-electronation).

so, Zinc acts as a negative, anode.

(ii) At the copper electrode, the metal undergoes reduction which needs electrons( electronation)

so, copper acts as a positive, cathode.

Predicting the Feasibility of a redox reaction

With the help of the electrochemical series,

It is used to calculate the cell potential of an electrochemical cell at any given temperature, pressure, and reactant concentration.

In a galvanic cell, the Gibbs free energy is related to the potential by ΔG°cell = −nFE° cell.

If E°cell > 0, then the process is spontaneous (galvanic cell).

If E°cell < 0, then the process is non-spontaneous (electrolytic cell).

Commercial cells should be portable and have minimal voltage loss while in use.

A battery is a collection of two or more cells connected in series.

A commercial cell is defined as follows:

An external electric energy source cannot reverse the electrode reactions in these cells. Reactions occur just once in these cells, and they expire after usage. As a result, they are not chargeable.
Dry cells & button cells are two common examples.

A dry cell is a type of electric battery, commonly used for portable electrical devices.

These are found in flashlights, toys, flashlights, calculators, tape recorders, and a variety of other gadgets.

a) It is made up of a zinc cylinder. This is filled with a moist NH4Cl paste and a little amount of ZnCl2.

b) A zinc cylinder serves as an anode. A graphite (carbon) rod serves as the cathode.

d) During usage, the zinc casing is consumed, and as a result, it develops holes that cause leaks. An iron or steel sheet covers the zinc in leak-resistant or dry cells.

Some cells can be recharged. These are referred to as batteries or storage cells. These can be recharged and reused as a source of electric power again and again.
Secondary cells include nickel-cadmium (NiCd), lead acid, and lithium-ion batteries.

This cell is also rechargeable. It lasts longer than lead storage cells but is more costly than lead storage batteries. However, because it is smaller and lighter, it offers some advantages. It is suitable for use in portable and cordless products.

a) It is made up of a cadmium anode and a metal grid containing NiO2 that serves as a cathode.

b) KOH is the electrolyte in this cell.

A fuel cell is an electrical energy-producing device that transforms chemical energy. Fuel cells, like batteries, require a constant supply of fuel, most often hydrogen. They will continue to generate energy as long as there is fuel available.

Satellites, space capsules, autos, boats, and submarines have all been powered by hydrogen fuel cells.

1) In this cell, hydrogen and oxygen are bubbled into concentrated aqueous sodium hydroxide or potassium hydroxide via a porous carbon electrode.

2) The fuel, hydrogen, is supplied into the anode compartment and oxidized.

3) The oxygen is supplied into the cathode compartment and reduced.

Batteries are collections of galvanic cells or cells that generate an electric current. The potential of a battery formed from numerous cells is an integer multiple of the potential of each individual cell.

In that they produce an electrical current, fuel cells and batteries are similar in that both require constant additions of fuel and oxidizer. 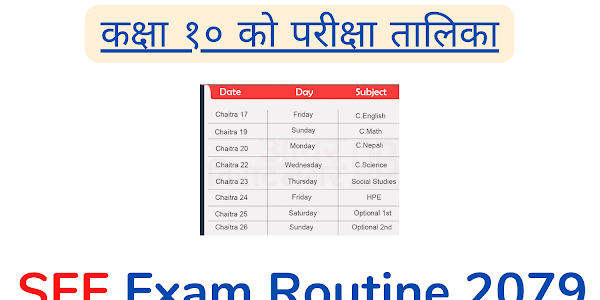